The Enduro World Series drew to a close in Finale, Italy with Cube’s Greg Callaghan ending the 2018 season sixth overall.

With the EWS taking in back-to-back rounds in Spain and Italy, it was a busy end to the eight round championship. After a topsy-turvy mid-season, Callaghan stepped it up with 10th in Spain and then eighth in Italy to jump up to season-ending sixth overall, while in the Women’s Under 21 there was podium joy for Leah Maunsell with second.

It was a busy weekend in Italy with a full crew of Irish making the trip out to the Mediterranean mountain bike paradise. In total 16 Irish riders made it out to Finale for the four big stages that offered some breathtaking views overlooking the Italian coastline. 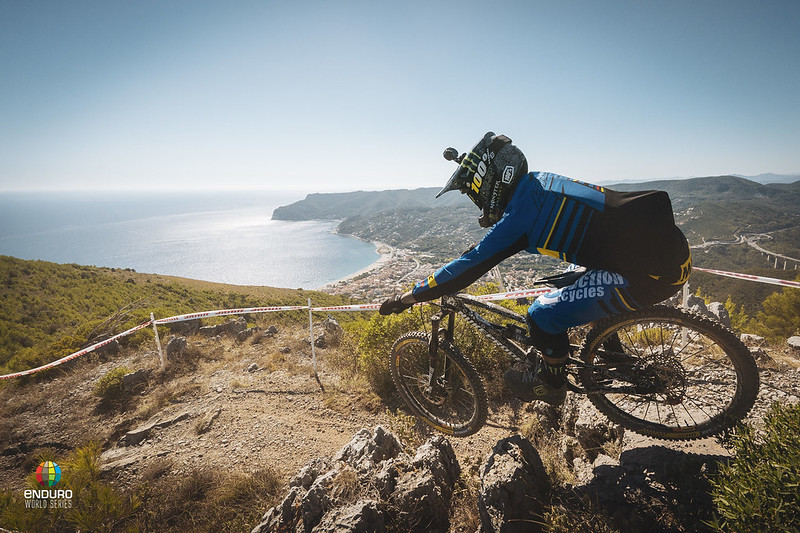 Keen to end things on a high and armed with his envious custom painted Cube Stereo 150 in the Irish flag, Callaghan was fully motivated to make things count. Hot out of the traps for stage one, the third fastest time put him right where he wanted to be.

However, ending up in a bush on stage three put paid to a potential podium result, but bouncing back for the fifth fastest time on stage four brought him back to eighth on the day.

“I got my lefts and rights mixed up and ended in a bush,” told Greg. “Gutted because the podium was there but sixth has been a good way to end the season.”

Last @world_enduro of the season done and dusted, such a good day out with all the lads and the Italian crowds were awesome as always. Love being a part of this @world_enduro community, so many good people involved! Mixed emotions frkm the race for me, was battling for a podium but got tangled in a bush and threw any podium hopes away. 8th in the end and managed to jump up to 6th in the overall so stoked with that. Huge thanks to the whole @cubeactionteam for the support this season, super excited to get the head down and come into 2019 swinging! Also thanks to @fullninemedia for this video! #bikesareclass #BeCube

Signing off on his first full season of EWS racing, Chain Reaction Cycles Kelan Grant brought his Nukeproof home in 55th in the standings. After a shoulder injury in Whistler, Kelan only returned to competitive action the previous weekend in Spain for 54th. With 41st on stage two, he again ended his day 54th overall.

Dipping inside the top 70 for 67th, Killian Callaghan carded some top times on stages one and three with 58th and 47th fastest.

Jonathan Maunsell was next best of the Irish in the Pro Men with 130th, while Chris Kilmurray was 12 places further back in 142nd. Making his EWS debut, Brendan Foley came home 198th out of 224 entered. For Dan Wolfe, his day was cut short when a crash aggravated an elbow injury.

Byrne Best Irish In Under 21 Men

The Mens Under 21 was a full house with 70 riders on the billing, topped by the newly crowned champion Elliott Heap.

Racing Spain and Italy, Expert Cycles’ Harry Byrne turned a few heads last weekend with two top 11 times for an eventual 37th overall. Keen to improve on that, he went nine places better squeezing inside the top 30 for 28th.

For Vitus’ Jack Devlin, Finale was a bumpy ride. Losing a shoe among a few other things pushed him back to 38th. Another Callaghan making moves in the EWS was Emmet Callaghan. Gaining more world stage experience, he pushed on for 52nd.

In the Women’s Under 21, the Irish flag flew on the podium thanks to the incredible efforts of Leah Maunsell. Despite being a latecomer to the 2018 EWS, Maunsell was quick to make her presence felt. Second in Spain she backed that up again with another second place finish to end the the championship third in the world.

“It’s pretty cool to be #3 in the world and it gives me something to work on for next year for sure,” said Leah. “It’s not been an easy year for me after a slow start to the season with finishing my school exams and then just being unlucky with injury after injury, so to pull it back and end the season on a high means a lot to me.”

Not a bad way to end the trip to Euroland! Happy with P2 here in Finale Ligure after another sweaty days racing. It’s also pretty cool to be #3 in the World and it gives me something to work on for next year for sure. It’s not been an easy year for me after a slow start to the season with finishing my school exams and then just being unlucky with injury after injury, so to pull it back and end the season on a high means a lot to me. That’s a wrap from me this season and now it’s time to get home and eventually start Uni😂 Huge thanks to @konabikes for the flawless Process 153 and for making these trips possible. Also big up to my family for all their encouragement and support it means a lot @ecaroline16 @cieran_maunsell @jonathanmaunsell. Loving my @spin_11 kit abroad 🇮🇪#teammaunsell

In the Mens Master Glyn O’Brien led the Irish contingent home for a well-earned 12th. Only two places further back was Paul McLoughlin in 14th. Joe Ward was 25th, while Fergal O’Mahony and Sean Egan were 48th and 49th respectively.

So that’s a wrap on the 2018 Enduro World Series, congrats to all the Irish who made a trip out to at least one of the rounds this year!

Jacob Dickson Aiming High In Les Gets After Season-Best 13th